Three Children and a Paint Brush 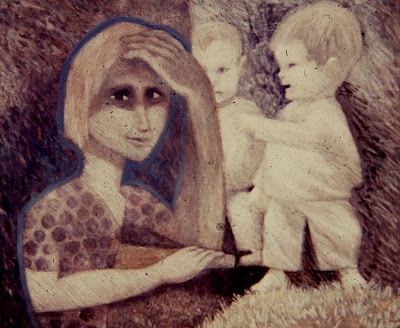 My mother was a painter, an artist, a good mom. I remember growing up on the front lines of her art. Her long murals stretching the entire length of a room or around it. Long worlds slowly being formed, the stories being told as you went along.

She may have helped define the narrative of Las Vegas as much as any other artist, because she reminded us that this world of elegance that we see, it too is under the influence of what has come before, a child of history, subsequent periods, both good and bad.

She was a story teller and towards the end of her life she was even deeply interested in writing screenplays and musical plays. At 73 she had a screenplay in progress. Mostly, though, she was about color.

In 1973 she put down her brushes, thereby giving up all of the prestige, glamour and accolades that were hers to claim had she continued in the realm of art. She was, after all, the or at least an “it” girl when it came to large work painters in the city, although I’m sure there were other very talented artists working at that time. She produced murals for many of the finest hotels in the city including Caesars Palace, The Desert Inn, The MGM Grand, The Sahara and Circus Circus to name just a few.

She was part surrealist, even part dada-ist. She was also a traditionalist. She was also a fashion model as a young woman, posing for ads for large department store chains in Los Angeles in the 1940s. She ran the whole gamut, from dark to light.

She got “saved” in 1973 and gave her life of to Jesus Christ, her “Lord and Savior.” She ran a Bible store for 23 years until she closed it after her passion for painting was re-ignited.

She painted 150 canvasses between 1996 and 1998, an unholy output, considering she was in her early 70s and fighting breast cancer. Her demeanor never soured, except once, when I spoke to her at the very end of her life, when she uttered, appropo of nothing: “The rage.”

I never knew what that meant. I guess I never will. I hope it is a good thing, but I sensed it was also a bad thing. Perhaps she was mad at one thing and nobody knew about it.